This charming and offbeat musical comedy comes to the The NoHo Arts Center for eight performances only!

It Happened In Roswell tells the story of hard-nosed reporter Scoop O’Reilly, who’s chasing reports of a flying saucer just to save his sagging career. But when it turns out there really is an alien and it’s a wide-eyed sexy girl searching for love whom the Army wants to capture and dissect in the laboratory, well, Scoop discovers he’s in a big pickle: get the story, or get the girl? 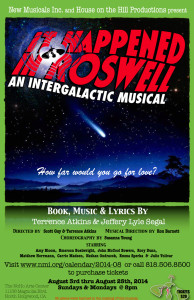